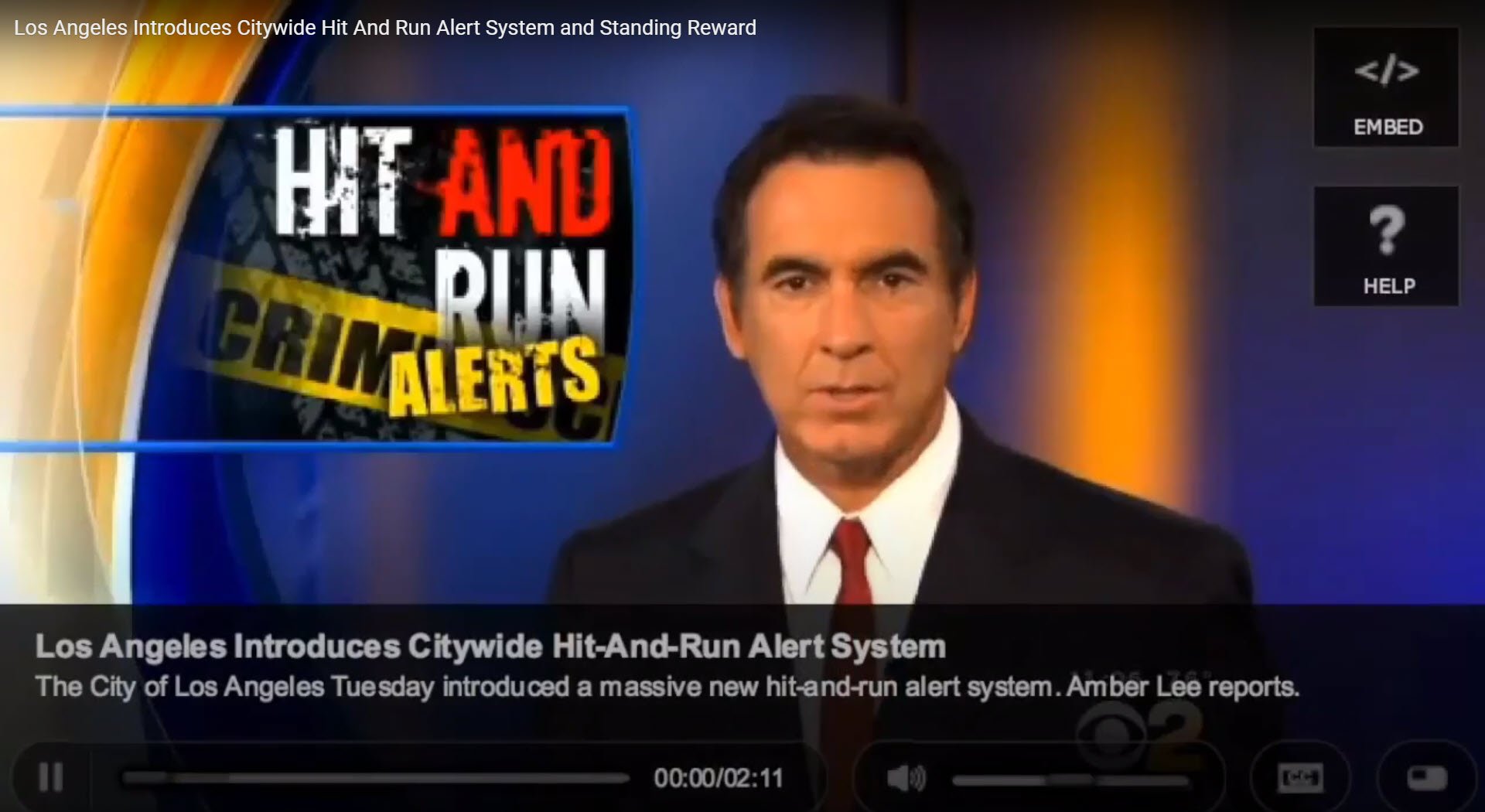 Civic Center Officials announce that Los Angeles is launching a hit-and-run alert system that will publish information on social media about cars and drivers linked to fatal and other severe hit-and-runs. Patterned after the Amber Alert System, the new hit-and-run alert system modeled after a similar Denver program will post information from the LAPD on Facebook, Twitter and Nixle, a website where government agencies share information with other agencies and constituents who subscribe to updates. The information also will go out to DASH bus drivers and the city’s 2,300 licensed taxi drivers on their dispatch systems, a Transportation Department spokesman said, with the possibility of expansion to other city drivers, such as Department of Water and Power and Bureau of Sanitation workers.

In addition to the alert system, City Hall also will offer standing rewards for information that leads to the arrest and conviction of a hit-and-run driver: $50,000 for crashes where someone was killed; up to $25,000 if the victim was severely injured; $5,000 if someone was hurt; and $1,000 if property was damaged. The reward money will come from the city’s general fund, which pays for basic city services. Using social media won’t cost the city anything and could save money in the long run from the LAPD’s budget if more hit-and-run cases are solved. The rewards seek to deter on top of criminal penalties where fleeing the scene of an accident where someone was killed or severely injured is a felony punishable by up to four years in prison and $10,000 in fines. Drivers convicted of misdemeanor hit-and-run — where no one was seriously injured — can face $1,000 in fines and up to a year in jail.

According to the most recent public data, the LAPD solved only one in five hit-and-run cases. Of those cases, fewer than half were closed through an arrest. 40,000 hit-and-run collisions occur in Los Angeles County every year. Of those, 8,000 hit-and-runs resulted in injuries or deaths. While the national average for hit-and-run collision is about 11%, in Los Angeles County the rate is over 50%. On the streets of Los Angeles, there are now a staggering 20,000 hit-and-run injury accidents annually. Los Angeles does not even take reports for non-injury hit-and-runs unless they involve City property. Hit-and-run drivers kill about 22 bicyclists, 40 motorists and 92 pedestrians each year. Another 324 bicyclists, 1,004 pedestrians and 2,293 motorists are injured annually. It has only recently been officially acknowledged that 52% of all injury street accidents and a slew of recent deaths resulted from hit-and-run accidents. It finally led Police Chief Charlie Beck to declare that Los Angeles is suffering from a “Hit-and-Run Crises.”

The Automobile Club of America found that unlicensed drivers are 66.36 times more likely to be a hit-and-run driver than a licensed driver. The California Department of Motor Vehicles reports that unlicensed drivers are three times more likely to be involved in fatal collisions. The high number of hit-and-runs correspond with the high number of the undocumented who are unlicensed or witnesses unlikely to come forward. California’s governor signed a bill into law to permit the undocumented the ability to obtain driver’s licenses beginning in 2015. Irrespective of licensure, if an undocumented worker was to stay on the scene of a automobile accident they could risk deportation and this fear promotes a “nothing to lose” mentality: that the consequences of fleeing are equal to or less than the consequences of being arrested for having no license and being involved in a fatal car crash. 58% of fatal hit and run crashes occur on Friday, Saturday, or Sunday. 47% of fatal hit and run crashes occur between 9 p.m. and 3 a.m. A high percentage of these hit and runs are alcohol-related and even a higher percentage flee with a suspended license for driving under the influence conviction. It may explain why hit-and-runs account for twice the fatalities as those charged with Driving under the Influence.

Like many cities across the country, Los Angeles drivers and pedestrians are increasingly distracted by electronic devices. The problem is exacerbated, however, in Los Angeles where the entire transportation system is so dependent upon the car. In an age where surveillance video can identify terrorist suspects within hours of an event, it is strikingly dumbfounding that most surveillance media is blurred, black-and-white images captured by a nearby business camera that cannot identify the driver or the license plate. Hit-and-run accidents are notoriously hard to solve. To place a suspect behind the wheel in an accident, there needs to be a perfect mix of helpful eyewitnesses, forensics — such as car parts at the scene that can be matched to a suspect’s vehicle — and DNA from the victim once a car is recovered. Hit-and-runs are so prevalent because Los Angelians’ notorious lack of witness participation resulting from diffusion of responsibility in urban settings, distrust of law enforcement and witness vulnerability stemming from immigration status, economic hardship to criminal wants or warrants. Surprisingly, Los Angeles is bucking the trend by also suffering from an epidemic of hit-and-runs by expensive luxury sedans. The LAPD had been subject to harsh criticism for historically placing a low priority on solving hit-and-run devoting only 12 officers from each of the four traffic divisions to assignments to handle more fatalities than most homicide units. There is simply no LAPD task force or organized city effort to address the problem. Most hit-and-runs are never investigated. The overwhelming majority of hit-and-run accidents that rise to a criminal investigation are never solved. Even when the suspect is arrested, all too often the penalty is little more than a slap on the wrist. Most first offenders sentenced to just 3 to 6 months of community service even though penalties for felony hit-and-run can be as much as several years in prison. Prosecutors find it difficult if not impossible to prove that a hit-and-run motorist was under the influence or grossly negligent days after the accident when the suspect is no longer under the influence and evidence of the collision has been repaired. Prosecutors are quick to negotiate a plea especially when juries tend to view hit-and-runs as an act of panic rather than a calculated decision.

Hit-and-run motorists are considered uninsured under the law. In California, an insurance agent must provide automobile insurance with uninsured motorist coverage at the same limits as liability coverage unless a signed a written waiver is obtained. The law requires that there be contact between the hit-and-run vehicle and the victim’s vehicle or person. If there is no contact, the hit-and-run claim will be denied. Contact, however, need not be major, even the slightest touching is sufficient. While most automobile policies require that a victim file a police report, under the law, a claim can proceed even if a victim does not or cannot file a police report. Uninsured motorist coverage extends to members of an insured’s household even if they are unlicensed, bicyclists or pedestrians.

Previous Article: Los Angeles' Pedestrian Fatalities Nation's Second Highest
Next Article Auto vs Bicycle Accidents and Who is at Fault?